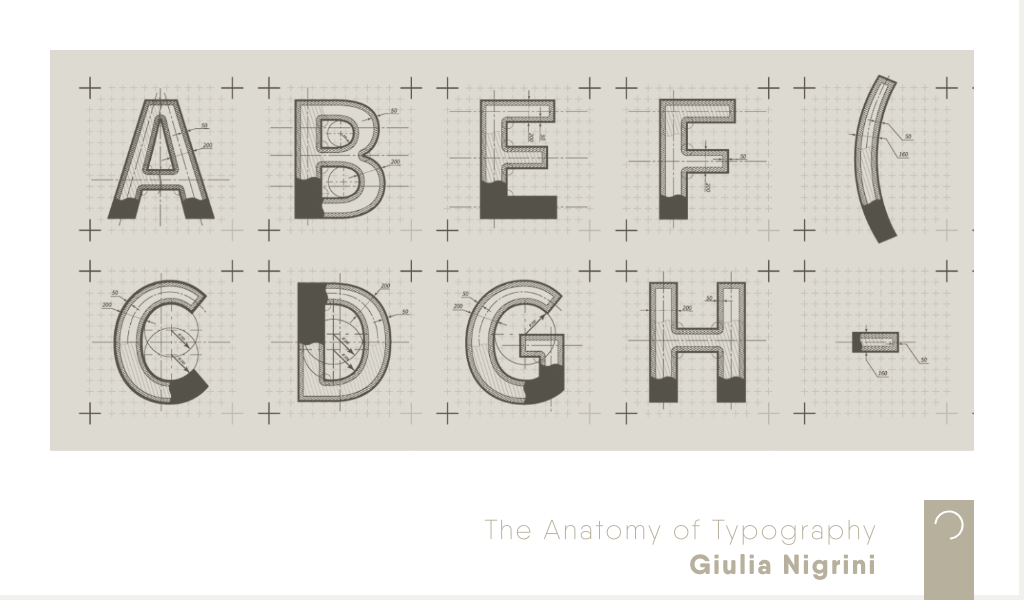 The Anatomy of Typography

When you hear the word typography, what comes to mind first?

Most people I have met tend to think of typography as something a designer knows about, or something a designer does to make words fit the way you want them to within your required piece. On the other hand, I find people simply asking, well what is typography anyway? In a previous article, I touched on the subject of logo design terminology and soon realized that more information was needed. Or rather information that is accessible to those outside of the design world. So let’s jump right into our topic.

Often we relate typography back to printing or a topic that exists mostly within the field of marketing or design. The truth is that typography goes back much further than you may think. A quick look into the history of writing and printing we find that typography is the starting point. All of the letters and symbols we use to communicate via recorded information were created by someone with the distinct purpose of being reused to symbolize a specific thing or feeling.

All the way back to the Sumerians, we were using the ideals of typography to record our tasks and record our history. The Mesopotamian cities of Uruk and Larsa are best known for the evolution of the cuneiform text. Eventually progressing to typesets being invented for movable type during the Song dynasty in China by Bi Sheng. Until finally becoming a part of Western history when Johannes Gutenberg created his typeface from lead-based alloy furthering the development of print to what it is today.

This is just how we use the type practically though. Typography is in itself is a work of art combined with skills and technique to make language legible and pleasant to the eye (THE INFLUENCE OF DUTCH GRAPHIC DESIGN & TYPOGRAPHY). The professionals designing the typeface are looking at each letter with intense focus. Finding minute details that could alter your experience. An experience you did not even know was happening. An experience that not only affects your emotions but physically alters the way you experience reading that word or phrase or book. We owe a great deal to those designers without knowing that we do.

In the current day, we use these terms interchangeably as we developed our printer, and interacting with fonts became more commonplace. Though some time ago the difference was significant due to the printing process of manual typesetting. This article by Claire Green on The Difference Between Font and Typeface provides a lovely look into the history.

So when your designer is in the process of trying to select a typeface for your logo or corporate identity bare in mind that there is a great deal that goes into the decision. They are looking at a whole set of glyphs that will suit your company image throughout the font options that exist in that typeface. Though it may seem arbitrary it is in fact important to know your preferred typeface and specific font that your brand image uses. Slight changes can alter your experience but also that of your audience. A metric that is crazy difficult to measure just by the way.

The Anatomy of Typography

Now that we have our foundation for this topic set in place, let’s go look at the terms used in typography.

A character refers to an individual symbol. This is most often used on social media sites where they limit the number of characters as this can be a letter or numerals or punctuation versus limiting word count.

An alternate character general refers to an individual symbol included in the typeface that is decorative or unusual to the set.

The serif is a line or stroke that is an extension of the letter that appears on the open ends of the letterform.

The words sans means without so a sans serif typeface is one that does not have the line or stroke extension at the open ends of the typeface.

This is a term most of us who work in office administration are aware of as it is often used in Word documents. This refers to the word sitting at a slight slant towards the right. I have always found it to resemble cursive writing.

When you want to have a word or phrase stand out we often select this function when writing a document or email. This is the thickening of the letters which gives them a darker appearance and somewhat “jump out” at you.

Much like the previous term a cap line also assists in the organization by acting as an alignment guideline for words and symbols horizontally on the top of the words or symbols. Basically giving you a cap of letter height.

The x-height is the height of the lowercase letters from the baseline.

Spacing between letters needs to be consistent to provide a comfortable read. Tightening or loosening the letters excessively can cause a disjointed experience and cause difficulty for the consumer. Tracking is about keeping the spacing accurate and comfortable.

Kerning is particularly important in logo design as this is the space between two individual letters. Adjusting this space can create a sense of uniformity.

Again, spacing is important ut this time we are looking at the space between baseline to baseline. Adjusting this will give you a more open or more closed looking text.

Designers need to understand these terms for obvious reasons. Have you considered the possibilities of understanding them as an onlooker?

Yes, you can always assume that the professionals know or even understands what you are trying to get across but we all know what assumptions really are in the end. Having the right terms or some grasp of the field you can better communicate your needs as a client and the designer will likely have an easier communicating with you as well.