The first time I watched Black Sheep I was certainly expecting a sort of horror. What was surprising was the storyline, the good acting, and a remarkably entertaining sequence of events. It has become one of those movies which will always remain in my collection.

When you are first met with the lead character you find yourself seeing the absolute humor in his situation followed by the complete understanding of how this ridiculous person with an arb perspective on the world came to be. The characters seem remarkably relatable while so far removed from the general reality most of us like to stick to.

The story follows a young man on his journey back to his parents’ farm, now run by his brother. His distinct inability to deal with the situation is apparent from the beginning. His brother’s forced distance and peculiar behavior increase the awkward feeling of the film. After an experiment goes the way of the dodo the livestock on the farm start to become bloodthirsty. Together they have to battle the grim and truly bizarre creatures while maintaining some sense of sanity through it all. 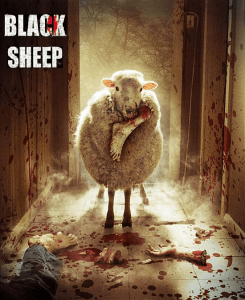 I have watched this movie about 3 or 4 times since first finding it and I will likely watch it again. This film somehow brings gore and comedy together in such a way that is enjoyable. I felt like it was a bit of gamble after watching the trailer, but I was too intrigued not to jump in headfirst. I will admit the beginning has a moment which is hard for me to watch but the rest of the film is just immensely entertaining right up until the end.

Would I recommend Black Sheep?

Without a doubt, this is a film I would suggest to pretty much everyone I know. It is certainly not a child-friendly film so I would watch the film when the kids are in bed.